One month ago today, my husband fell. It was Good Friday, and thus began his descent into the final weeks of his mortal existence. He entered the ER as a man still fighting, angry at fate, determined to get out of there as soon as he could. Sadly, that vital man never left the hospital.

On his darkest day, spring had extended a tentative hand. I’d expected to take him for a rambling drive along the shore, as he so loved to do. Instead, an ambulance bore him away. My drives will be solo now. He will be my unseen passenger, gazing through the windows as the road unfolds and rolls behind me. So much changes in a month!

Today, May 3rd, is one of those mornings when I can truly say, “God’s in His Heaven; all’s right with the world.” Of course, that applies only to my small corner of the world. In Nepal, nothing is right. In Baltimore, the aftermath of devastation will take time to clean up and heal. In many places, life is a struggle and the odds of survival are far lower than our own. We would be foolish to imagine ourselves the center of any universe, great or little.

Still, all I can do is celebrate the sunshine here. Where is Heaven, anyway? Is it a location? A spiritual state? An energy field? Another dimension? If God – either gender – is there, can He or She also be here? Do the two realms overlap? Will those of us in our material bodies ever connect with those who have moved to another form?

Is David wherever Heaven might be located? I’m assuming he’s in a place of rest, grace and healing. He deserves to be. He’d often claimed to be an atheist but he quite probably wasn’t. Agnostic, maybe, unable to know for sure and always up for a lively argument. But not a man in denial: his massive library testifies to his exploration of the vast and distant frontiers of science, history, philosophy, art, religion – everything that stands as testament to humanity’s finer (and lesser) achievements. Everything that makes us look up in awe and wonder. He has his answers now.

At the last, I choose to believe he accepted the existence of another, incomprehensible dwelling-place and of the Power that invited him to be there. He was alert and aware when matters of the soul were shared with him. His dear friend, John Symonds, sensed the strength of his acceptance. David had no voice, no movement, nothing but his eyes and ears. He had been reduced to vision and sound – the basics, his mind no longer concerned with food or drink or any other physical act. So he saw and he heard – watched and listened. That was enough, I think.

Who else might have been present in that room? His father, whom he never knew? His mother, with whom he needed to reconcile? His old friends long gone? The shouting boys of his childhood, the companions of his middle years? Whose faces were in the group assembled to lead him home?

In the end, he chose to leave for that unknown realm and departed in peace. Today as I work in the gardens, David will be in my thoughts. He so enjoyed his zero gravity chair, where he’d read and listen to the river. Cash was inevitably curled in the grass beside him. Gollum – who adored David and perhaps is with him again – slept in his little grave not far away. Nothing and no one is ever truly lost. This morning, I’ll walk across this bit of land and tend my flowers. I won’t be alone. The knitting of the heart’s bones will be slow. But they will knit in time. 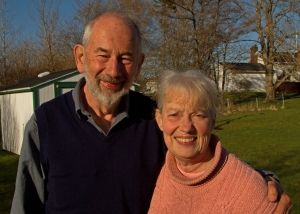