The moon swims on an indigo sea, a drift
of mist across the horizon’s swell and shift,
star-gleam, wave-play, foam-sigh on breakwater.
I gaze from the wharf and shiver with my daughter
to watch the boats process below our places,
traps bright as candy, ropes, far-looking faces
already out there, already somewhere ahead

on the open ocean. No fanfare here – instead,
just a scatter of women, a quiet man with phone
to capture the moment. We move to the rocks, alone
in the gathering silver. A last boat leaves us there.
Its trail of light is hung on the edge of air
as we turn to go, while moonset drags the sky
with a wrap of cloud. We smile – my daughter and I –
and stumble back to our car in the rising dawn.
When we pause for one last glance, the lights are gone.

Living by the ocean, as we do in Nova Scotia, entails both risk and reward. The rhythms of the tides lap our shores and pulse through our bodies, even when we’re far inland. There’s always an awareness of this regular beat, the monotone that never ceases keeping time. Click – high tide – click – low tide – and all the suspensions between: these are the measure of our days and years.

Whether or not our own families include those who fish or otherwise make their living from the waters, we all know people who do. Most of us enjoy their catches and support their efforts by purchasing fish. It is a fair exchange although, sadly, the market prices seem to have little bearing on what the fishermen receive.

And yes, I call them “fishermen” as opposed to “fishers” which, to me, are small and rather mean animals. Furthermore, I admit that in the Bible, the term “fishers of men” is used. That doesn’t make much of a case for “fishers”, though, because “of men” is pretty exclusive too.

Women participate in the fishery as well. They’re included here. Language that is reshaped by political correctness can sometimes turn rather ugly and, to me, that’s the case with something as ancient and honorable as the fishing culture. When I was a child, catching brook trout, my Dad always used to call me “a good little fisherman” and I was fine with that. It’s just a term. I will continue to use it, because “fisherwomen” sounds so awkward … and besides, the “men” ending is part of “women” too.

For those unfamiliar with this particular occupation, the first day of the lobster season probably holds little significance. For us, down in Districts 33 and 34 in southwestern N.S., it is a time for both celebration and anxiety. Termed “Dumping Day”, it signifies the placing or dumping of traps in each boat’s assigned grounds. They’re hauled by the thousands – up to 400 per boat, divided into manageable numbers and dumped on more than one trip – then cast into the sea, attached to buoys that mark their locations. The early morning of this day is observed by those on shore, who gather at wharves and other coastal sites to see the boats off. At Yarmouth Light, there’s always a crowd, enhanced by music and photographers and a breakfast for all present. The boats parade past, gleaming in the pre-dawn darkness. Their mast lights float like stars.

On the wharves themselves, closer to the actual departure of the boats, friends and families assemble to watch and bear witness. I prefer this; it allows me to see the action close up. It’s a more personal experience to stand, wave and wish good luck. My camera catches the foam, the crew balanced on the gunwale or standing on deck, the stacked traps, the procession of boats in a line of hope that strings across the horizon. No diamond necklace is as beautiful as this sight. I enjoy reading the inventive and often comical names given to these sturdy Cape Island craft: EZ-Go-n; Full of Bull; Obsession; Knot Too Shore. Then there are boats named for loved ones, usually children or wives. The family’s story rides on the waves. One cannot separate the boat from those whose lives depend on its bounty.

Almost inevitably, there will be some kind of mishap. The boats are heavily-laden and now and then, one will be swamped and come to grief. It is a good first day when this happens only once, or not at all. Sometimes, an engine will fail, or a crew member will be injured. At the very worst, during the several months of the season, a boat will be lost and her hands will perish in the bitter North Atlantic swells. This is the unthinkable; this is the knife-edge that touches every fishing community with its tracery of fear. Every seaside town or village has its own monuments to those whom the ocean has taken: some are visible, others carved on the hearts of the people. The list of surnames often contains considerable repetition – fathers, grandfathers, sons, grandsons, nephews and cousins, all gone from the world but never from remembrance. When we sit down to a lobster dinner, we are partaking of an accumulated heritage. We are also commemorating courage, determination and danger. No fine thing comes without its price.

But another Dumping Day has passed. The boats once more ply the Gulf of Maine and offshore currents, hauling traps, bearing their harvests, returning again and again. I often walk the shorelines here and step past washed blue and orange gloves, bits of wire mesh, rope, buoys. On a rough sea, it’s easy to drop something overboard. Lines and cables break. The evidence floats back to these rocky beaches where it lies unclaimed.

Here’s to a successful and safe fishery from now through to the end of May! Or, in the words of a Yarmouth business whose sign would probably be taken the wrong way in most inland places: 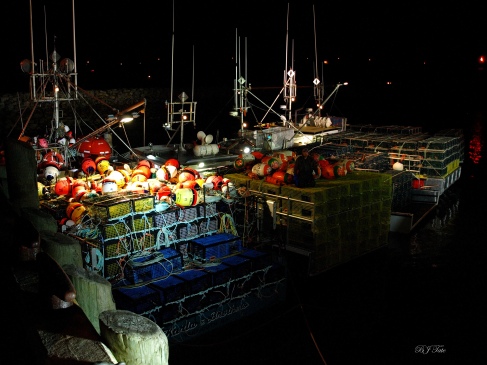 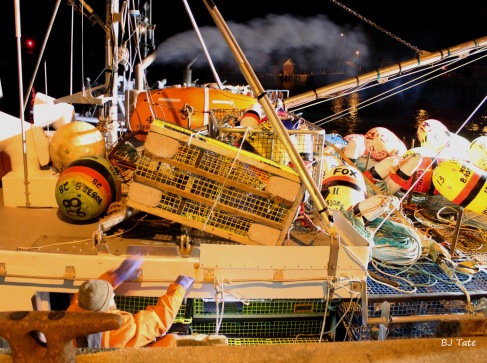 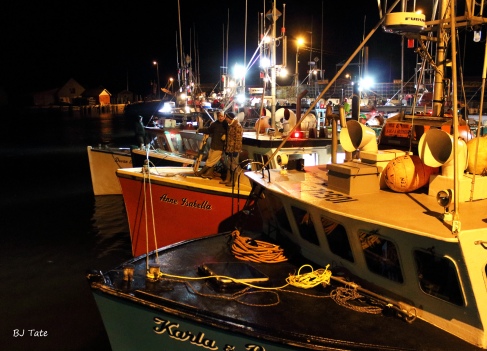 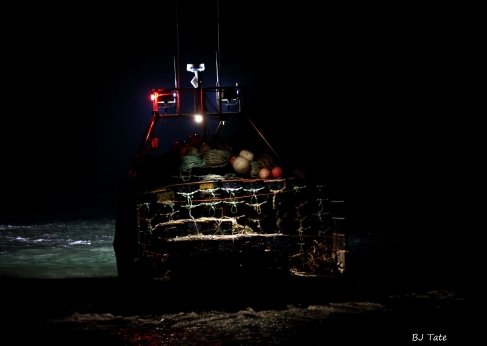 2 thoughts on “A Salute to Seafarers”